THE WILLIAM A. WHIFLER HOUSE IN BURLINGAME, CA, HAS BEEN LISTED ON THE NATIONAL REGISTER OF HISTORIC PLACES.

The architecture of a formally undiscovered Mid-Century California Modernist Master has found national recognition by the listing of the William A. Whifler House on the National Register of Historic Places by the U.S. Department of the Interior, and inclusion into the California Register of Historical Resources.

Built in 1958, the architect, William A. Whifler designed it as a “retirement” home for his mother on a plot of land that had been a formal garden next to their 1912 craftsman bungalow family home.  His design for this house, containing some 1500 square feet of floor area, stands out like a jewel among Bay Area Modernism for its bold yet delicate interplay of structural steel, glass, concrete block, copper, and redwood.  The home gracefully cantilevers out over the steep back portion of the lot and Mills Creek below.  There is nothing like it in Burlingame, or California, or beyond.  Still owned by the Whifler family, The William A. Whifler House has remained in the pristine condition of its building in 1958.  Besides his civic architectural work, the Burlingame City Hall, Whifler’s residential creations are mostly hidden treasures of the San Francisco Peninsula, set back deep into lots so his clients could privately enjoy their glass houses surrounded by nature. 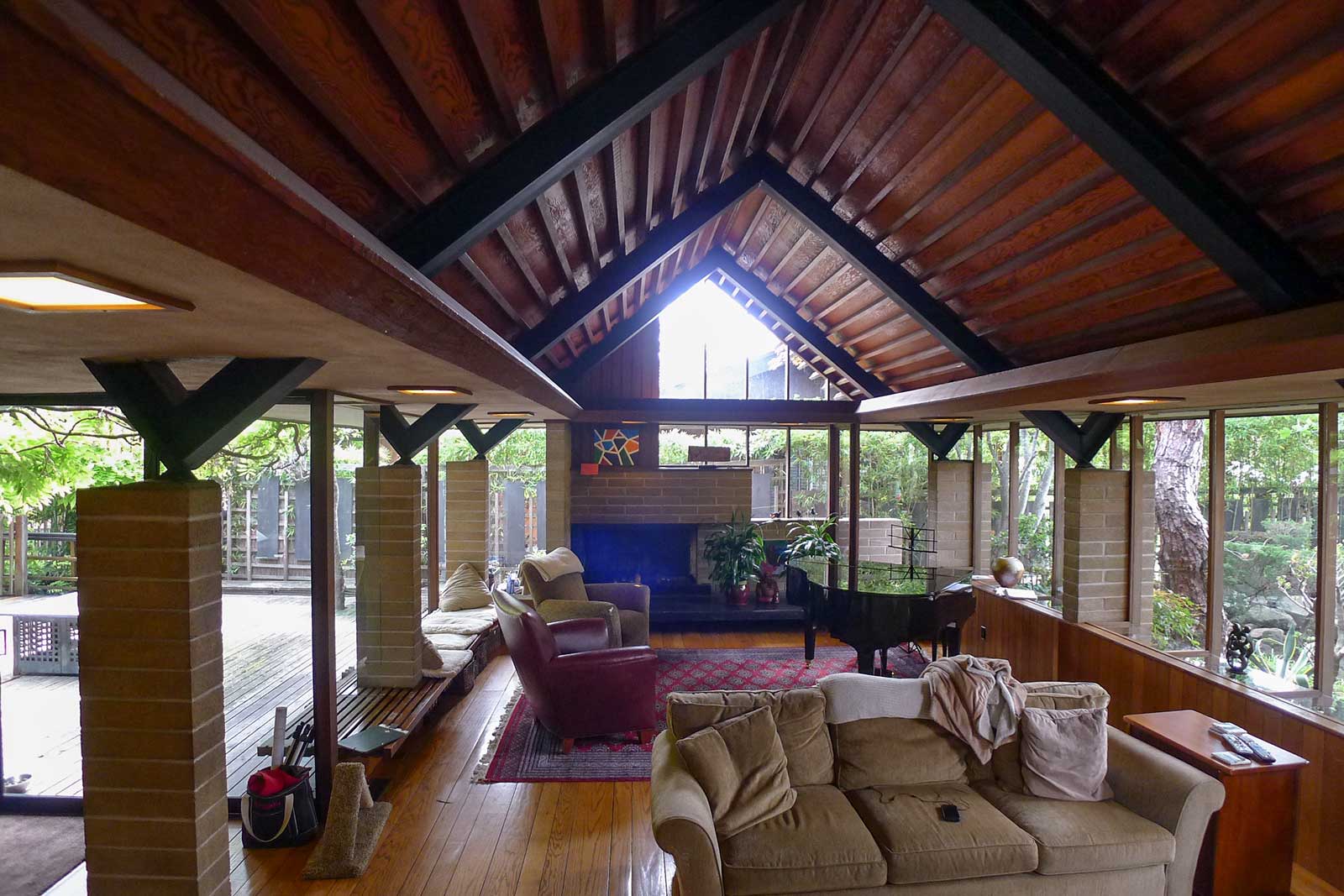 Getting the William A. Whifler House on both the National Register of Historic Places and the California Register of Historical Resources proved a long and arduous journey but three things made it possible.  First, the great work done by Thomas Rex Hardy, AIA, Architect, and Robert Bruce Anderson who recognized the home’s extraordinary architectural significance then set out to research, document, and delineate in technical detail a presentation through a myriad of forms the petitions for recognition that were ultimately accepted by the State and Federal Governments.  Second, it was the desire and determination by the Whifler family to seek recognition of this creation and to share its artistic significance with the community and future generations.  Thirdly, fundamentally, it was Whifler’s inspired architecture that made all this possible.   Also a shout-out of thanks to Jay Correia and Amy Crain at the California Office of Historic Preservation. 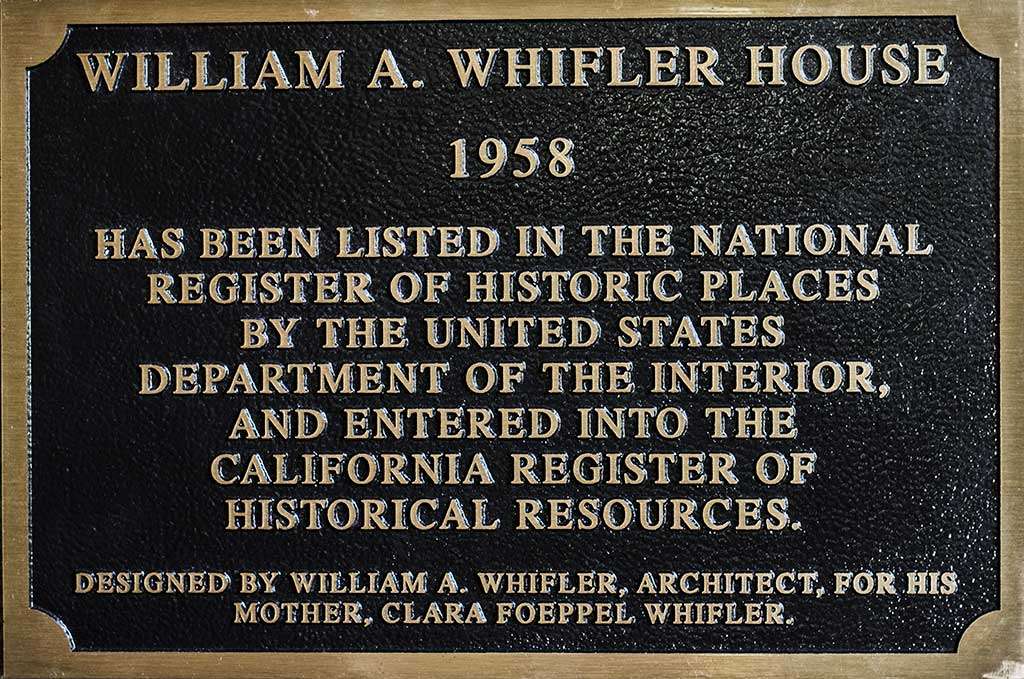 The conclusion to the National Register of Historic Places reads as follows.

“The design and construction of the house at 1544 Drake Avenue together achieve a refined elegance as is evident in the building’s well-crafted, cohesive use of building materials that characterize modernist architecture: wood, steel, masonry, and glass. Interior rooms and improved outdoor spaces, such as the U-shaped, rectangular court and the Japanese garden in the house’s front yard, coexist with one another through the extensive use of floor-to-ceiling planes of transparent glazing. With the notable exception of the peaked living room roof, supported by steel frames fabricated in a manner whose custom configuration suggests the letter W, the ceilings and roof areas are horizontal planes that project expansively, enhanced by widely cantilevered soffited eaves. In addition to embracing California, and more specifically, Bay Area Modernism, the Whifler House draws inspiration from an intensely personal and local source, the next-door childhood home of the architect, a 1912 California Craftsman bungalow that had at its core a U-shaped courtyard. Formed with a similar U-shaped courtyard, the Whifler House at 1544 Drake Avenue draws upon a delicate floating masonry and steel structure to hang a curtain of glass creating a masterwork of Modernism that is in part a reimagination of the architect’s boyhood Craftsman home. The Whifler House exemplifies a historically significant contribution to Modernism in both design and use of materials. It also embodies a unique vision of high artistic values and is the work of a master. It is eligible for listing in the National Register of Historical Places under Criterion C in the area of Architecture.” 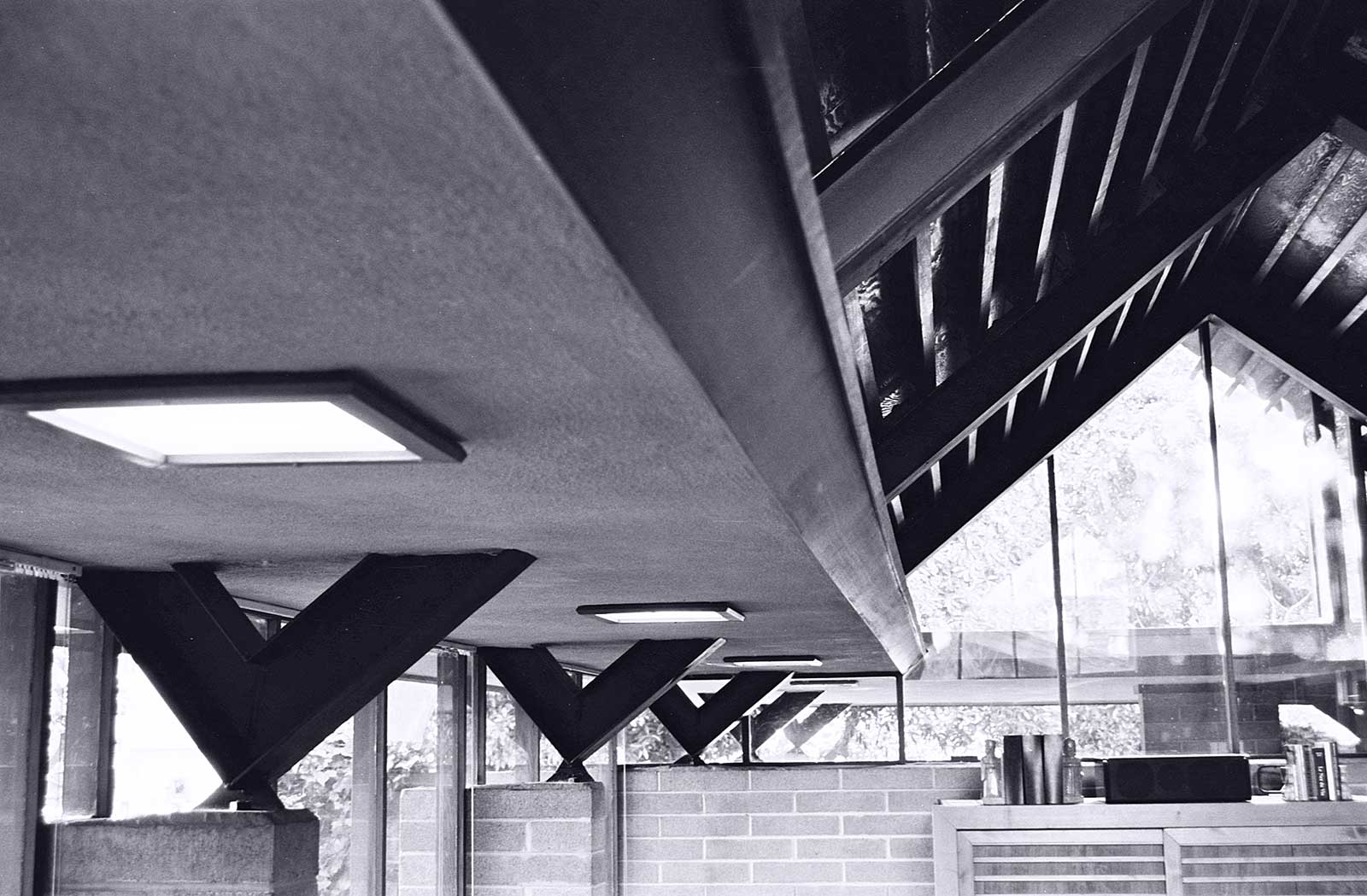 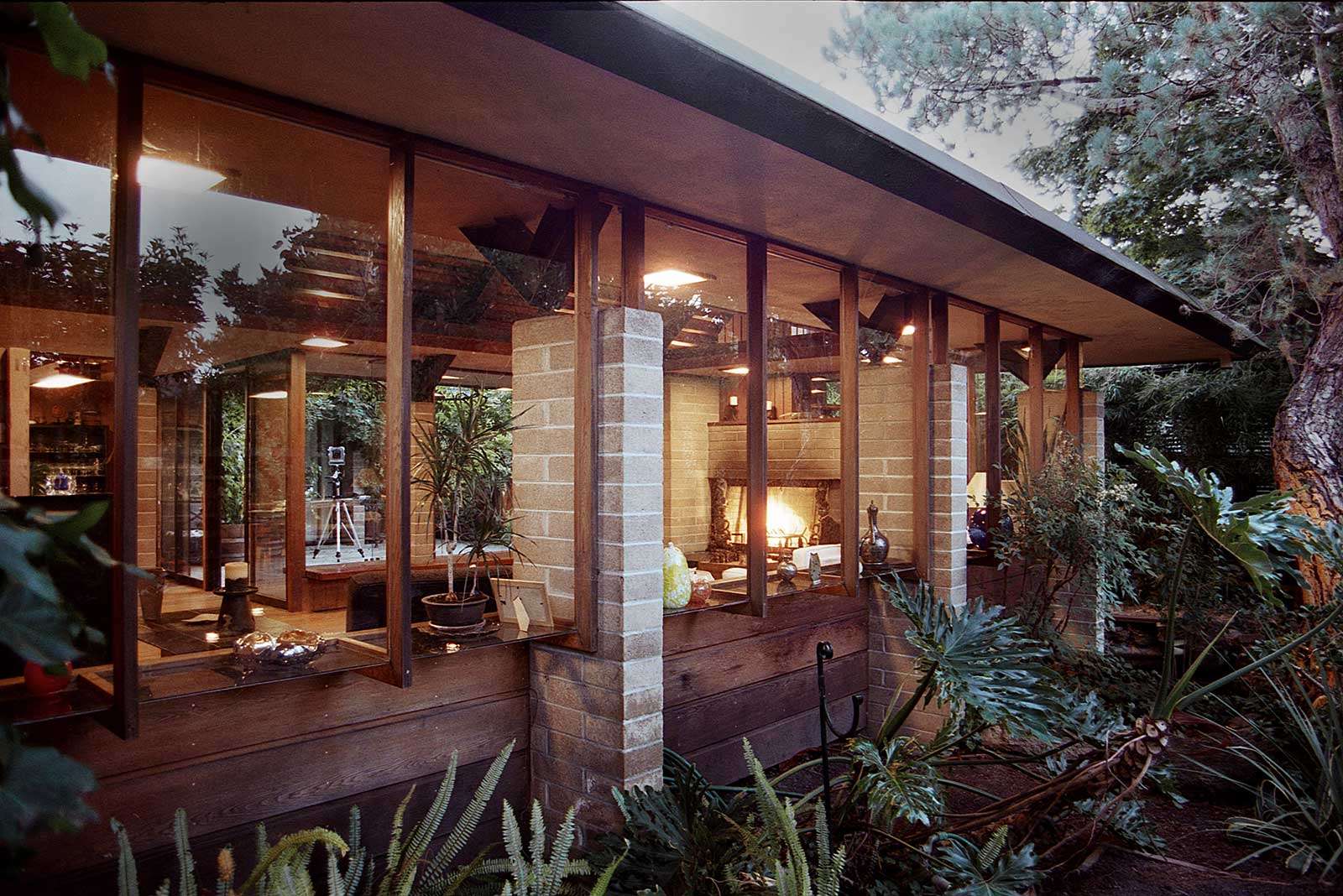 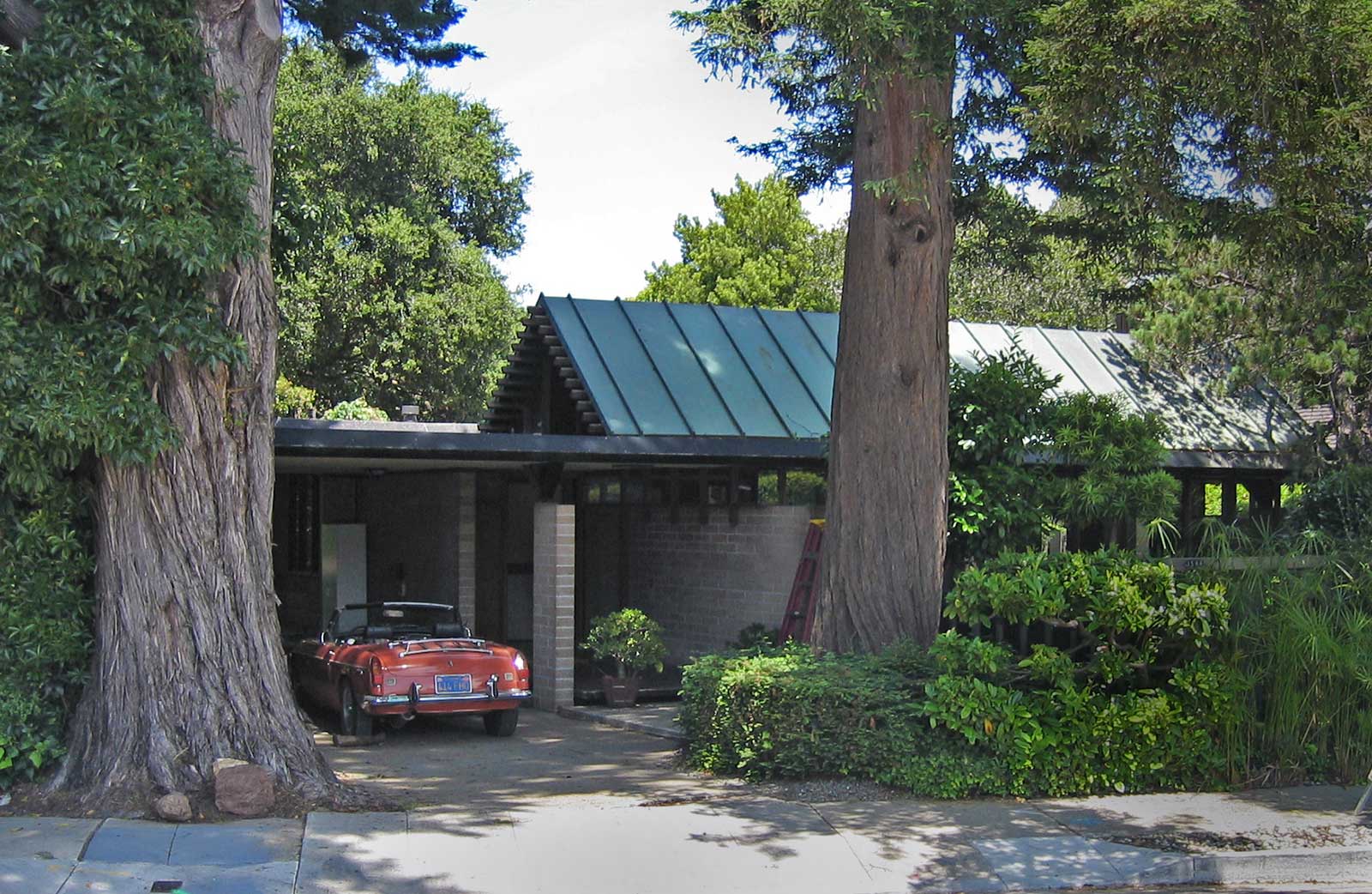 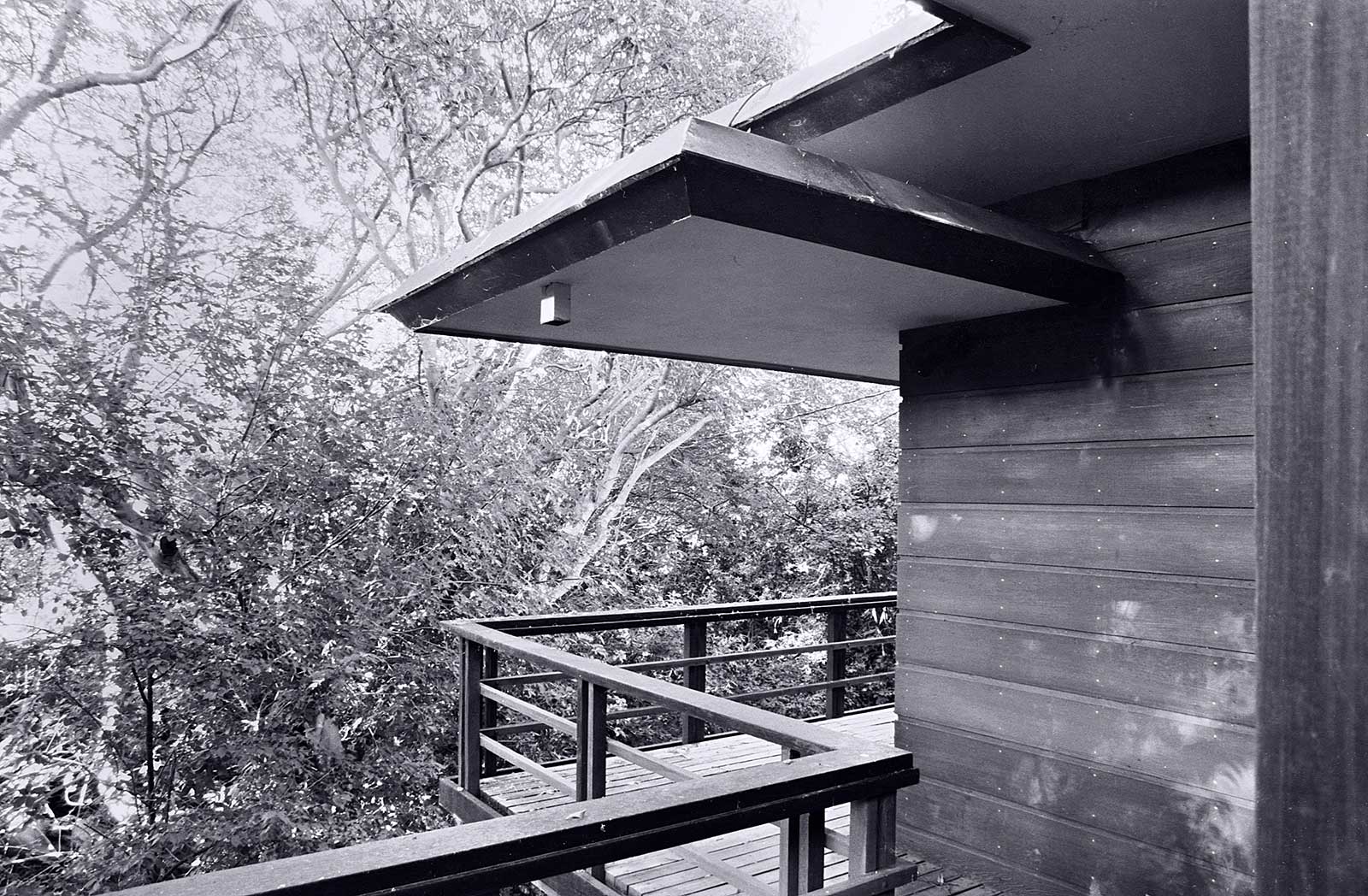 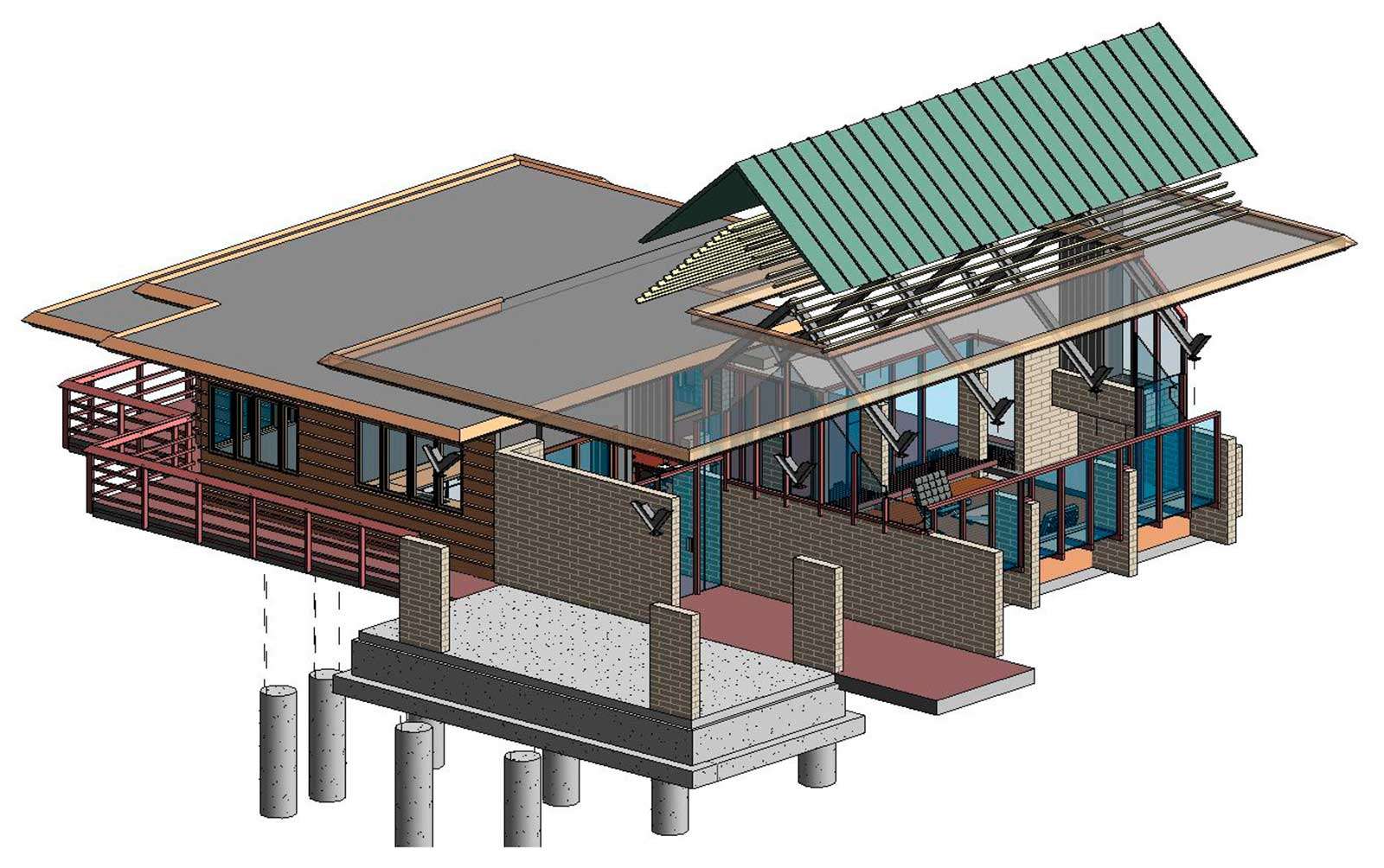 His creations embraced modernism, yet the architecture of William A. Whifler (1925-1984) was of his own, personal, individual, inspired by the textures and light of Northern California, and by a boyhood fascination with a neighbor’s exotic house.  Born in San Francisco, Whifler grew up on Drake Avenue in the Bay Area suburb of Burlingame, CA.  Located at the end of a sparsely populated street, where the suburb gave way to dairy pastures, the family home was a Craftsman Courtyard Bungalow surrounded by endless sprawling gardens.  For a young William Whifler it was an ordinary Peninsula neighborhood of the 1920’s and 30’s save for one unlikely structure, an authentic traditional Japanese tea house directly across the street.

Whifler’s works spanned the boom times after the war, from the 1950’s to the ‘70’s, a remarkable era of seemingly endless creative architectural possibilities that today is marked by the title, Mid-Century Modern. 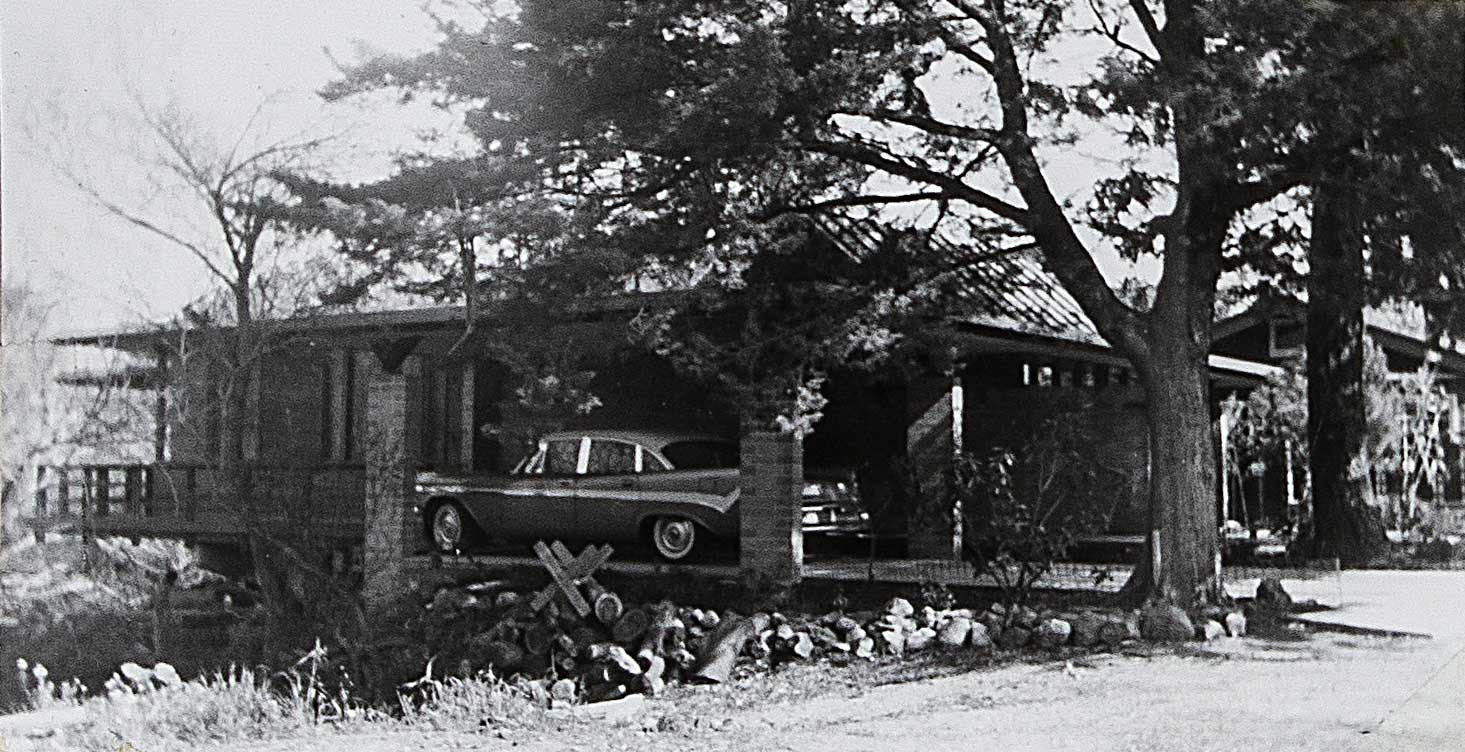 c 1958.  Clara Whifler’s Desoto parked in the carport at her new house.  On the right is the peaked roof of the old family craftsman home. 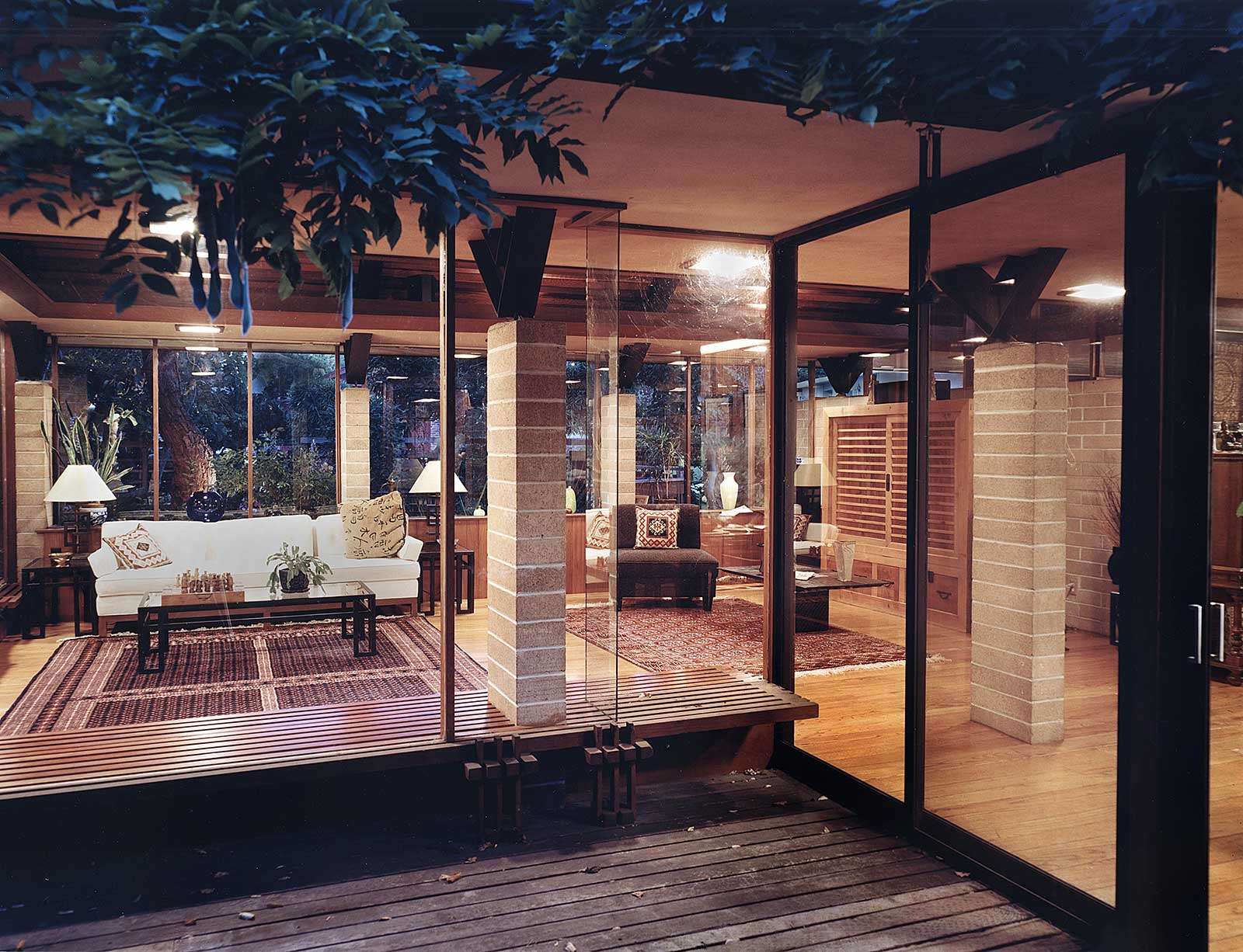 His designs were mostly residential, crafted of wood, glass, concrete block and steel; and sublime in form as to bring to mind names like Rudolph Schindler, Richard Neutra, or Frank Lloyd Wright.

William Whifler’s life and architectural creations were grounded in the communities of San Francisco’s Mid-Peninsula.  He married his Burlingame High School sweetheart Jean, attended The College of San Mateo, graduated in architecture at Stanford University, raised his family in Hillsborough, and went on to become Professor and Co-Founder of the Department of Architecture at the College of San Mateo.

At a time when tracts of Eichler homes were erected en masse, Whifler was commissioned by those seeking something extraordinary, something custom, modern, and warmly human.  Whifler’s clients wanted to both own and live within a work of art.

Relatively few have seen his creations.  And many have been lost to “makeovers” or teardowns.  This home, untouched by time, designed for his mom and sited in the expansive garden of his childhood home, is a jewel of design, and now a recognized national treasure. 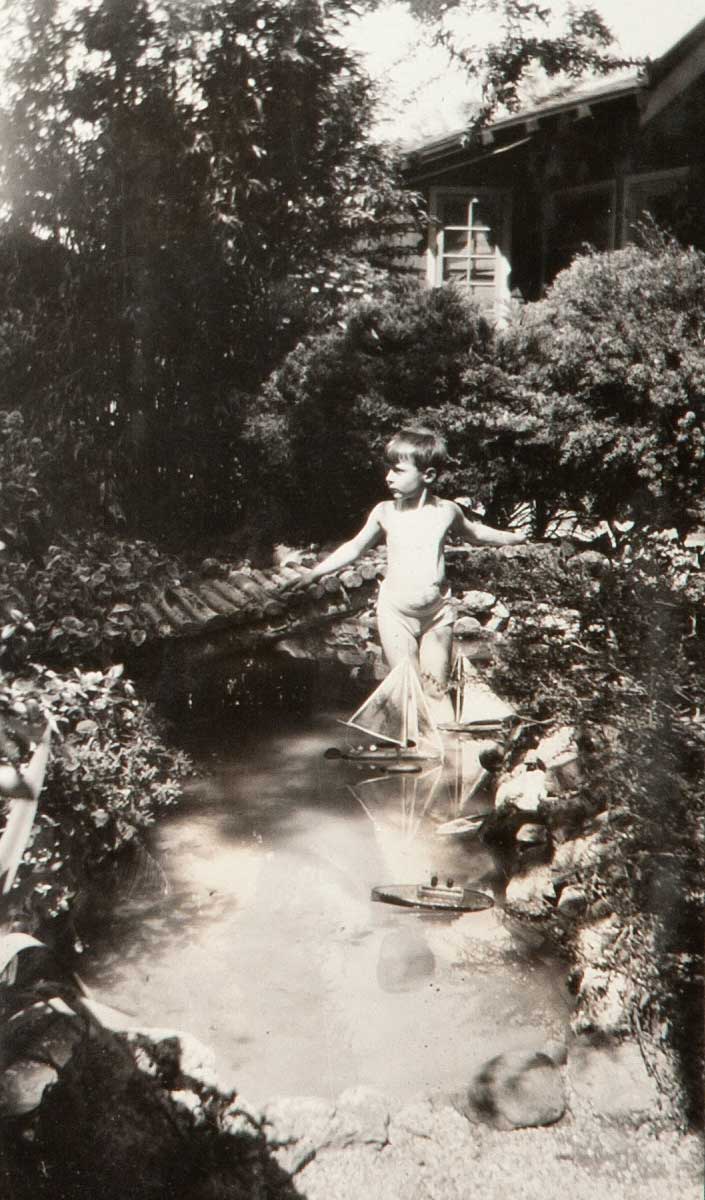 c 1930.  William A. Whifler stands in the family garden fishpond on the land he would design a home for his mother 28 years later.

More about the William A. Whifler House

More about the architect William A. Whifler